Cedro Reports. The publishing sector grows thanks to paper books.

You are here: Home News Cedro Reports. The publishing sector grows thanks to paper books.

Madrid, 22/07/2019. For the fifth year in a row, the Spanish publishing sector has continued to grow in sales thanks to the strength of printed books, according to the report on Domestic Book Sales from the FGEE.

This growth comes after a total of 2.36 billion Euros in sales, a figure which shows the health of the publishing sector, which is regaining the revenue it lost during the economic crisis, as can be seen in the following chart: 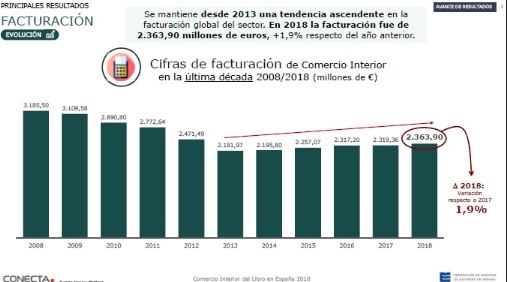 During the presentation of the report on July 16, the president of the FGEE, Miguel Barrero, explained that the data indeed shows the sector’s improvement since the crisis. However, it continues to be affected by some constraints caused by the crisis, “such as the reduction in book buying budgets for public libraries as well as school and college libraries. It was also caused by the policies within Public Administration regarding textbooks.”